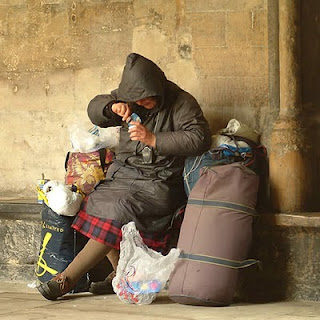 Today I was in the lobby of my home church chatting with friends, wearing a cool jacket that usually gets most of its use during the Christmas season and getting ready to settle into a warm pew, when in walked Cindy.

Cindy didnt look like the rest of the crowd in their christmas best, although she was wearing a green sweatshirt. She walked right up to our holy huddle (uh hum) and had no problem with asking for $8.00 for a bus pass for her and her husband.
If you were like me, you could guess the rest.  She was gonna tell me sh needed money for gas or for a bus ticket to get her hungry baby and wheel chaired husband to the soup line because they haven't eaten since they were evicted by a satanic landlord.  At least that is what i thought was coming.  Cindy did want money for a bus ride because her husband had cancer and they had to get to the hospital and then to her in laws.  But that is where my stale and probably ungodly pre-conceived notions stopped.
Ive been around situations like this all my life, especially being on staff of a local church.  I have this internal program that kicks in when I encounter someone like this. The program makes me think that, among other sweeping generalizations, that all panhandlers immediately take the money they get and run straight to the nearest crack dealer. But this time I actually had time to talk with cindy and, according to my program, prove that this panhandler was likely a liar and a drug user.
I walked with her to the bus station expecting at anytime for her story to change. We rounded a corner and there was an elderly man standing by a bus. His name was Ormel and he wasted no time in telling me about his cancer, surgeries and even raised his shirt to show his recent post op scars (I didnt ask for this but I think God wanted to confirm every detail of the story). I did ask the bus driver how much a ride was which he confirmed that a day pass was $4.00 one for Ormel and one for Cindy.
Before I walked back to the warmth of the sanctuary I prayed for them and then watched the bus pull away with my two new friends and no crack heads or drug dealers in sight.  Every detail of Cindy's story was true and everyone of my pre conceived notions false.  Time for me to start thinking again.
My prayer - Lord let me see through your eyes without pretense; let me give like you would without judgement; let me love like you would - period!
Posted by Rawdbee at 3:37 PM

Rawd I love you and want you to know even though these people are who God has called me to your story made me think. You see I also have a reliance on my own preconceived ideas. Thank you