I wanna be a macho man 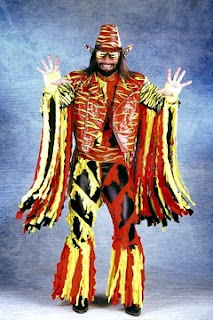 I wanna be a macho man
At least I do in the way that my late grandpa, John Vietti said; and it has nothing to do with the village people or randy savage.

The year was 1988 and I had just graduated with my undergrad degree, accepted my first full time youth pastors position and moved in with my grandparents (not so much for free-loading but to establish myself financially before getting my first apartment). My grandfather was a feisty Italian man who always had something humorous to say, a joke to tell or a prank to pull.
I remember the day he came home from a doctor’s appointment, which also happened to be his 50th wedding anniversary. He walked through the door with his mesh baseball hat cocked back and sideways (way before it was gangsta) and said, “buddy, I told the nurses in the office today that I’m a macho man!”

Last week was my 21st wedding* anniversary and I was reflecting on the following story and contemplating how I too can be a macho man; even one of biblical proportions. Ok, so back to the story.

I figured, I’d bite, ok grandpa, why are you a macho man. He said I told all those pretty nurses that I’m macho because I made the same woman love me for 50 years. Anyone can get someone to love them for a couple years or even 5; but im at 50 and counting.

I decided that day I wanted nothing more in my life than to be macho.

Thanks grandpa, I miss you.

*happy anniversary babe. You are awesome for sticking with me and for making me look good by you looking so good; I mean drop dead gorgeous. Thanks for sticking with me even though I’m not yet half a macho man; but with your help in another 29 I’ll get there.
Posted by Rawdbee at 9:05 AM