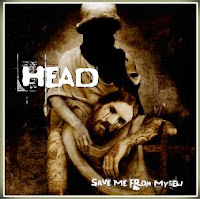 Brian "Head" Welch
Save Me from Myself
Released September 2008

Since leaving the band Korn in 2005 Brian became a Christ follower, got baptized in the River Jordan, started an orphanage in India, wrote 2 books (one landed in the top 20 on the NY Times best seller list) and just released his first solo release; not a bad three years.

“I gave you everything, all the pain life brings, just to get you to come back to me.”

This is both the opening line and the tone of the cd.

Incredible guitars, solid lyrics and decent vocals are what you get from Brian “Head” Welch’s freshman release, “Save Me From Myself”.

Hey one would expect some rock your face off guitar work from the man who pioneered the 7 string guitar and Head does not disappoint.  they are hard, in your face, melodic and thick.  They are often backed with eerie synth and incredible drum tracks thanks to Josh Freese (The Offspring, Nine Inch Nails, ).  The title track proves the power of power chords, not overdone but perfectly muscular.

The lyrical content tackles tough issues head on with perfect passion, boldness and thoughtfulness.  Topics include (and deal very positively with) drug abuse, physical abuse, teen abortion, suicide, rebellion, religion and money.  Head knows his influence and handles some subjects antithetically.  Die Religion Die and Re-bel would conjure Korn fans to a typical anti message.  Head uses them in a tertiary way evoking the opposite message (rebel against what is bad and die formal, bad religion).

Besides penning, Head plays several instruments, and belts several layers of vocals.  Lets see I think for this musical genera (nu-metal?) there are besides singing, a groaner, a shrieker and an obligatory screamer; Head lays all the main vocals.

Overall this release is solid; albeit, not for everyone.  There are very dark overtones both musically and lyrically (die religion die).  Although the seemingly negative lyrics are really not.  Fans of Korn and those of us new to the party can appreciate this release for face value.  For an initial release, the music here is complex, easy to get and huge (see the first 30 seconds of Adonai).

Having said that, this vid aint for everyone.  It is graphic, macabre, hard hitting, edgy and for some offensive.  My first viewing I couldn’t get past the chick on chick action.  After a little more thinking and seeing the obvious, the more subtle came through and I saw the light.

I’ll be concise but there be aware, SPOILER ALERT (if such a thing exists for videos)

2.  It is NOT a Sunday School lesson

3.  It is very positive and has real life testimonies

4.  Head breaks free from his chains

You can see the video with yesterdays links (see below) and make your own call.

In an interview on power fm Head says that he is not a Sunday School teacher and what he is trying to do with the video is reach his people.

I think he is but he may offend grandmas people in the process.