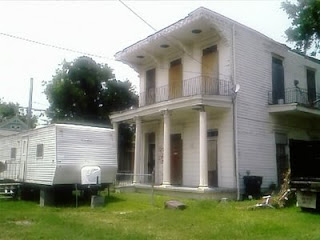 Originally built in the late 1800's as a single dwelling family unit, over the years this colonial plantation house has been modified, updated, 'updated', rebuilt and today, semi-demolished.

Calvin, the current owner tells me the story. After it was originally built, a back part was added to the original 3000 square feet to accommodate the families slaves. The house was probably the first in the area and besides affording a house, the land took up most of a city block. Soon the extra land was parceled out to other home builders and the adjacent plot became a community hall. Some time before the 1950s the house was divided into three apartments and rented out. Years later the city acquired the house and turned it into a day care center next to its other building. Calvin acquired the house in '04 and he, his wife and two sons moved in. The property next door passed hands as well and was on its way to becoming apartments when Katrina hit.

After Katrina unleashed its fury. The house sat in a foot of water, a huge pecan tree ripped open the roof and massive mildew began multiplying.

Months later a small white FEMA trailer was moved in front of the house. Calvin had been working for Shell Oil in Lafayette, his wife and younger son moved to Houston and his oldest son moved to Milwaukee. Only Calvin and his wife returned.

Fast forward three years. Some of the furniture had been moved out but by and large nothing major had been done with the house. And to make matters worse, his wife lost her voice. Most likely to either complications from living in a FEMA trailer for three years or a fungal infestation from the mold. This truly is a big house and since virtually nothing had been done in three years, this was also truly the big easy.

This week we are going to do our best to demo the entire inside of the house and show them our 'love as justice'. Until then, they need our prayers and encouragement. Jesus asked the man at the pool Bethsda if he wanted to be healed, the man didn't say a thing but picked up his mat and he was healed. Today was asked Calvin if we could him rebuild, he opened his door. To be continued...
Posted by Rawdbee at 10:50 PM