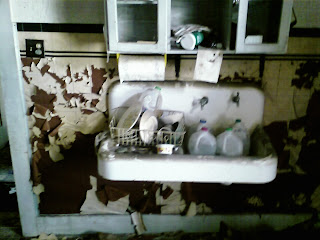 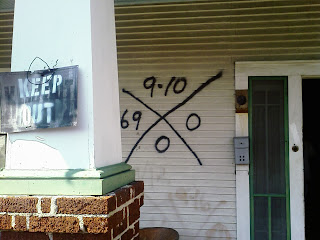 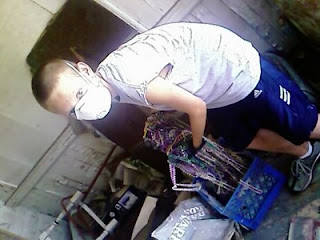 We understand our mission, we know our dutes, now it time for our toughest day so far - demolition. Its really difficult to get ones mind around the fact that 3 years after hurricane Katrina there are thousands of houses that have not been touched and even more people displaced and nomadic.

Today we demoed an entire house consisting of 2 single family 2 bedroom units. We were in a mostly poor area called the lower ninth ward consisting of mostly section 8 housing, one of the hardest hit in the aftermath of the storm. Before we began our demo project, we walked through the house and found evidence of three activities: a quick move out, looting and a deluge.

There was furniture, clothes, dishoveled medical equipment and even dishes in the sink denoting a expedited exodus. There wasn't probably much to pilfer from the beginning, but the place looked like a crime scene from a movie: things scattered, items shattered and other evidences of meaningless mayhem. Lastly about six feet up and scored into every wall, an undeniable waterline mark. If there was any doubt that the water had come into this house this high for very long, opening the walls and finding evidence of floating debris up to the same point confirmed it.

We stripped the entire house of furniture, junk and sheetrock leaving a literal bare bones structure: exterier wall, studs, floor and a partial roof. We filled a huge garbage bin about 8 X 15 X 8 up to the top. Not bad for a group of 27, mostly students.

Scripture says that unless a grain of wheat falls into the ground and dies, it cannot produce fruit. So are we. Unless we fall and shatter ourselves and and strip away our hard outter coating. Or demo our own lives we cannot be what the kingdom need us to be.
Posted by Rawdbee at 8:07 PM