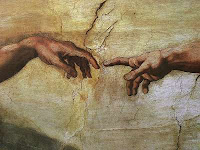 So, after a few minutes more, she dropped the bomb.

Is god real? Ouch, shot through the heart? not the question parents want to hear, but I do understand. My wife talked her through all the logic that a six year old could understand, and reasoned with her like a great mother would do. This whole thing transpired during the mommy daughter night time ritual, which I was not part of. After Jeanne did all the damage control she thought she could, daddy was called in to bat clean up. I loved it. I love teachable moments. I love dissonance. I knew we had an opportunity. I knew it would be fun.

I had one thing on my mind; to get her to understand that God is different than Santa or the Easter bunny. I understand God’s sovereignty and he wants to reveal himself to his people. I rested in that fact.

I don’t do real well with kids; I mean, I love my daughter but babies, toddlers and elementary aged little people scare me. I have to try too hard to tone down language and concepts. So sometimes with Sophia, when I’m up against a tough concept, knowing that we’ll have many more moments in which we’ll be able to unpack the existence of God, the Easter bunny, big foot and extra terrestrials, I settle for foreshadowing. I’ve also learned throughout the years that I don’t have to go to bat for God every time. So….

I came in to Sophia’s room confident and anticipating an adventure, wherein which we would all win. I had one point to make and a ball to toss into God’s court. I said “sweetie, what’s going on?”

We talked a bit about historical fact and categorical differences (in 6 year old understanding, I think) and I tried my best to get my point across; God is real and you will know in your heart that he is.

“You just will, he really wants you to know him and will do whatever it takes to show you; maybe tonight, maybe later. He will show himself to you and you will know for certain, that it was God and that God exists.”

“You just will. And right now were gonna pray and ask God to reveal himself to you.”

I prayed a prayer that would be appropriate for the situation. When we said amen, I saw a glowing face of amusement and astonishment; something was visibly afoot.

“Well when you were praying, I had a bad itch in my foot. I was going to scratch it, but I decided to wait until after you were done praying. But in the middle of the prayer I felt god itch my foot and showed me he is real.”

Several months later, the legend of the itchy foot continues. I’m not about to let that one leave the Jones’ tribal story book. And speaking of foreshadowing, if she ever questions the things of god, she’ll know, undeniably….

God is real, and he still scratches us where we need it.
Posted by Rawdbee at 10:36 AM