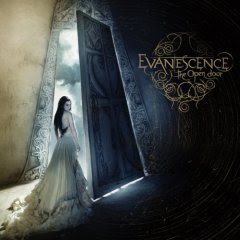 My theory is that a bands sophomore release shows what they are really made of. I mean it took a veritable lifetime to put together their first “ultimate release”, so the second release should tell if they have staying power. In this case, I’m going to call “The Open Door” a sophomore release because rehashed live recordings don’t constitute a full release (especially when you have only had one recording to date??).

Well, since that is out of the way, on with the comments.

Evanescence sophomore recording was an expected safe recording. They really hit it big with their first recording and developed a unique sound, or at least imported it, for a mainstream audience. Amy Lee has really brushed up vocally and her vocal pipes are stronger than ever. The rest of the band seems to have kept current and at least not gone backwards musically. The sound is the same, and that is ok for their “second” release but I was hoping for some new trails to blaze; either musically or lyrically. MOSTLY NOT THE CASE. One exception – the beginning of Cloud Nine and Snow White Queen showcase some interesting, and not expected loops that some could term almost danceable.

The CD is still a keeper because I personally couldn’t get enough of “Fallen”. So the hard driving guitars, ethereal strings, scary choirs and eerie piano are still here but now with more vocal presence, they sound a bit better. They are still mixed and produced well which separates Evanescence from other well to do semi talented bands. The guitars are as thick and greasy as ever, and the abrupt transitions from noise to cloud floating are clear and exciting. There are some droning ballads which grow tired really quickly (Lacyrmosa, Your Star, Good Enough).

Lyrically, maybe they have “Fallen” out of “The Open Door”. They are dark. The band is reaching for something spiritual, but falls short of happiness and subsequently keeps the entire CD in melancholy darkness. The content here is searching and grasping for deep but not finding either. Here are some intellectual insights:
“Lithium, don’t lock me up inside” (come on, a ballad with the rhetoric of a batter driving it). .
Call Me When Your Sober – how sweet; the jr high lyrics don’t mesh with the dark music genre.
There first single, “Call Me When Your Sober” is a case and point of the CD: Amy’s vocals - stellar, the music - solid, the feel – dark, the lyrics – juvenile.
The only depth of lyric is really the dark questions. But unanswered offer no positivity

There is enough good lyrics to see from where they came (the band originally met in an Arkansas Christian camp) but not enough to convince they did not leave their religious roots behind. While the opening song tells us, “Fear is only in our minds”, in the song titled “Lose Control” we are told, “Just once in my life I think it’d be nice just to lose control”. Although these extreme messages exist, there is far more “I’m standing on the middle ground, keeping my options open, while I have fun and maybe make up my mind and choose my real message” kind of lyrics.
Posted by Rawdbee at 5:07 PM