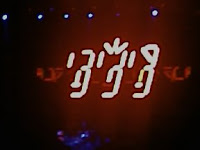 In case you didn't recognize, the above is the title of a Police song. To the left is the ubiquitous symbols from The Ghost in the Machine.

I just got back from the show in Dallas, and it was amazing. Twenty four years after their break up, they still got it. Elvis Costello opened the show, yawn. Actually, I felt bad for him because the venue was outdoors and the sun was shining right in his face and it looked like he got a pretty bad sun burn. 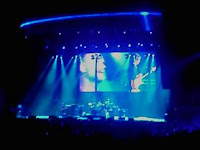 The opening song, Message in a Bottle, nice. No saving the best for last, although they did that too. Great music, great showmanship, great times, incredible concert. They played about everything you could imagine, at least all the songs you'd expect. I did kinda hope they'd my favorite song to sing when my wife is outta town, "the beds too big without you" or the completely random number "on any other day", they didn't, but a guy can hope, right? You can hear to song done to a non-police video here.

All in all they played almost everything except "Roxanne", Everything She Does is Magic" and "King of Pain", the first encore handled that. It also featured at least a 3 minute solo from Andy Summers on "lonely", it was brilliant. The final song of an almost 2 hour set was "Next to You".

Above is a "Roxanne" from the show.

Of course it wouldn't be Sting if there were no cause, no Amnesty International or pictures of kids in third world countries; it was and there were. A great montage of pictures inspired the audience to "Invisible Sun". 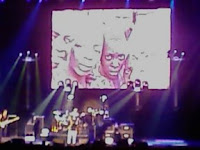 Its dark all day, and it glows all night
Factory smoke and acetylene light
I face the day with me head caved in
Looking like something that the cat brought in