The missions of San Antonio 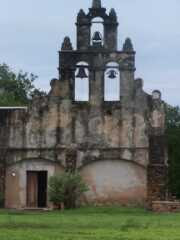 Below is a brief summary of the San Antonio missions. Our journeys this will let us explore all four (plus the Alamo, which isn't really a mission but the chapel of the former mission San Antonio).

The first mission, San Antonio de valero established on the west bank of the San Antonio river, near the villa de Bejar. It was later moved twice and found its infamous home in 1724 where only the remnant of the chapel lay today (along the river walk and better known as the Alamo).

The next mission was founded in 1720 (although the current structure, the second stone chapel, was not completed until 1756) and Father Antonio Margil de Jesus named it San Jose y San Miguel de Aguayo, although today it is known only as mission San Jose. This, the most complete of the missions, houses many rooms, walls a chapel, and offers a museum, an educational movie shown every half hour, a gift shop, and many helpful park and rec curators.

Ok, having said that, today we visited three missions: San Juan, San Jose, and Espada. We had a chance to see living history, touch the past, and project towards the future. Our professor this week is called history, and he is teaching. Lord grant us the ability to learn well.
Posted by Rawdbee at 12:43 AM