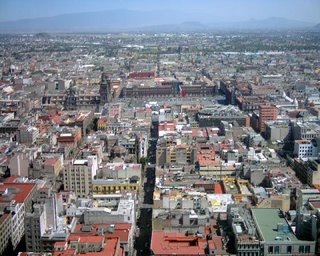 Context is a must on a mission trip. One needs to know the culture, geography and history of the field to be a smart and savvy misionary. Below is what we used for one of our encounter times and it makes for a great blog entry.

The Aztecs arrived in the Valley of Mexico in the 13th century. According to tradition, they founded Tenochtitlán ("Place of the High Priest Tenoch") on the site of current day Mexico City.

According to legend, Aztecs came to Tenochtitlan (ten o cheet lan) because of an omen: they followed their god Huitzilopochtli, (hoytz il poch tli)wto where they would eventually plant their city. After much wandering they saw a sign. On a boggy island in Lake Texcoco they saw Huitzilopochtli who ook the form of an eagle, wandperched on a cactus and waseating a snake. The leaders of the Mthe Aztecsinterpreted this as a sign to move their population to athis lake valley

Luke 6:47-49
47 "Everyone who comes to Me and hears My words and acts on them, I will show you whom he is like: 48 he is like a man building a house, who dug deep and laid a foundation on the rock; and when a flood occurred, the torrent burst against that house and could not shake it, because it had been well built. 49 "But the one who has heard and has not acted accordingly, is like a man who built a house on the ground without any foundation; and the torrent burst against it and immediately it collapsed, and the ruin of that house was great."
Posted by Rawdbee at 10:45 PM