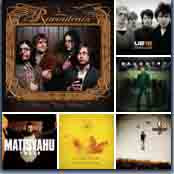 In my opinion, these were some of the best of 2006, musically that is. Below are my top 10 songs for the year. Click below to hear or buy them on itunes. For the most part the entire recordings are also worth the purchase too.

(if you can't access the link by clicking, cut and past the url into your browser. it will open itunes)

1. Unwritten, by Natasha Bedingfield (Unwritten)
Great, positive pop sound. Sometimes a little too bubblegummy, but well worth the listen. I look forward to her sophomore release to see if there will be longetivity. The recording has several other incredible tunes, some which were popular in the UK, some here, some both; "Single", "These Words" and "If you wanna" are incredible and "Wild Horses" is great, emotional and sensitive.

2. Steady as She Goes, The Raconteurs (Broken Boy Soldiers)
White Stripes front man Jack White goes side project but this is more than only side. There are several songs of note and a complete departure from his former band. This song champions the virtues of monogamy and is a great listen too.

3. Foreverandever, Etc..., David Crowder Band (A Collision)
This recording has it all; bluegrass, spiritual, alternative, innovative, worship, a recorded phone call conversation with a kooky interviewer… 22 songs, great diversity, intelligent lyrics, great value and a must for any collection. I had a hard time picking one song so this song is the "best" of the best.

4. Window in the skies, U2 (U2 18)
Kind of a "best of" recording, but the two new songs are worth the price of admission. Although "The Saints are Coming" (featuring Green Day) is also an incredible song, the video for Windows is a great, feel good tribute to rock and roll as U2 changes places from musicians to fans. If you download this cd from itunes there is a ton of bonus tracks you don't get on the physical cd.

5. Cassie, Flyleaf (Self Titled)
Passion, emotion, hard driving guitars, cute and powerful vocals, wow, great band – awesome cd. This first release shows creativity and talent; this band will be around for a while and like the band above, front girl Lacey Mosley has a sensitive conscience and a growing platform to exercise it.

6. Home, Daughtry (Self Titled)
This guy rocks. He had me sold before he shed his American Idol skin and started running with the big boys – you knew it was inevitable with Chris. The lyrics are softer than the in your face guitars, but the versatility and solid rock band stamina make up for other losses. With the late in the year release, 2007 will hear from Daughtry. "Home" is one of many great songs; Crashed and It's Not Over are also nice, very nice.

7. Crazy, Gnarles Barclay (St. Elsewhere) This track unavailable on itunes
This song is by far the best on the recording. Honorable mention goes to the remake of the Violent Femmes song "Gone Daddy Gone" but the rest of the recording is kinda juvenile. Crazy makes the list though.

8. King Without a Crown, Matisyahu (Youth)
What can you say about a Hasidic reggae artist that hasn't already been said? Wait what did I say? This guy is incredible, quick tongue, powerful lyrics and a talented musical supportive cast. Reggae fans, Jewish folk, rock fans and you will find this a great albeit interesting listen. Matisyahu is also featured on the recording below.

9. Goodbye For Now, POD (Testify)
Track one, "Roots in Stereo" feature Matisyahu and the CD only gets better. The passion on this recording has depend and expanded since previous recordings and finds it's way from the hard guitars to lyrics. " soul. This band has matured well.

10. Sweet Sacrifice, Evanescence (The Open Door)
The music here is what you would expect from the band but there has been some maturing since the last recording, mostly in Amy Lee's powerhouse vocals. This song is arguably not the only stand out from the recording but I am picking songs, not CD's. I did choose this song because the lyrical quality here stands out from the rest of the CD, but that is not saying much. I liked the music way more than anything else here, but overall it is still worth listening to.
Posted by Rawdbee at 5:16 PM